At a meeting on Tuesday, Viterbi School of Engineering Dean Yannis Yortsos confirmed that Robert L. Walker II was the graduate student accused of publishing racist posts on online forums. Yortsos confirmed those details on the record to Annenberg Media after the meeting.

"The university can't prevent him from coming to campus," Yortsos said in a phone interview.

Walker "hasn't committed violations on the law," but the engineering doctoral student, "has volunteered not to come to campus at any time," according to Yortsos.

Walker was accused of posting hate speech on a white supremacist website. His email address was linked to a username that appeared in multiple chat rooms associated with the planning of last year's white nationalist "Unite the Right" rally in Charlottesville, Virginia, according to screenshots released earlier this month.

Activist Emily Gorcenski was the first to make allegations against Walker, a USC doctoral student and research assistant at the USC Earthquake Center, to the public via Twitter. In her posts, she accused Walker of threatening and harassing her on Discord chat rooms, the same messaging system cited in the federal lawsuit against the "Unite the Right" rally. The event in Charlottesville in August 2017 left one protester dead.

An email seeking comment from Walker was not returned on Tuesday.  USC Provost Michael W. Quick said the university is investigating the situation.

Gorcenski's screenshots, along with leaked chat logs, were posted on Sept. 10 and show that a username with a racial slur in it, "n-onaut," was posting comments using racial slurs, graphic images of lynchings and expressing interest in guns.

Gorcenski said she was able to track down Walker's Skype and Twitter profiles because he posted those handles under the Discord username "n-onaut." According to a Twitter thread she published on September 8,  she found a Github account under the alias "captainobvious62" was also linked to his usc.edu email address. Gorcenski also noted that the Github username matched the Twitter and Skype usernames posted by Walker under the username "n-onaut," the same username seen on the Discord server chat rooms on an alternate server called Vibrant Diversity. 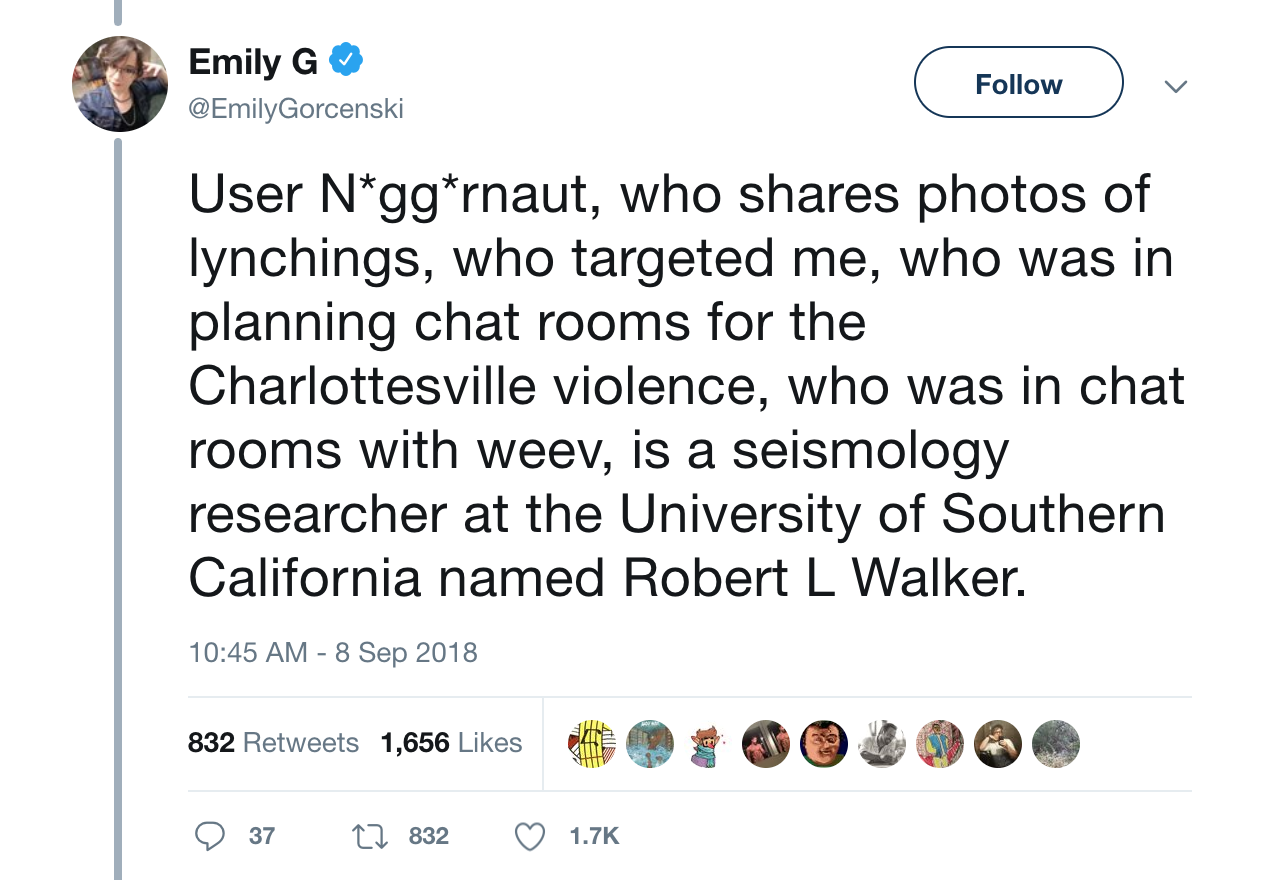 Last May, Walker's alleged affiliation with the white nationalist organization was shared with USC alum Razzan Nakhlawi, the Daily Trojan reported on Sept. 16. The article states that Nakhlawi received screenshots from an unnamed source.

On Friday, Quick released a memorandum to the student body acknowledging the online allegations against Walker.

"We never tolerate acts of bias and discrimination, or conduct that is threatening or intimidating to our community," Quick wrote.

According to Quick, the USC Department of Public Safety and USC's chief threat assessment officer are also conducting an investigation.

In an updated memorandum sent to students Sunday, Quick wrote:  "Although it is not possible to communicate the specifics of each case due to privacy laws. I want you to know that in this case the student in question will not be on our campuses for the foreseeable future as we continue our investigation."

USC Annenberg Media has chosen to abbreviate the username to keep racial slurs out of publication.

Correction: Robert Walker was referred to as a "research assistant at the USC Earthquake Center". That is incorrect, he is a member of the petroleum engineering department and not affiliated with the earth science department or the Southern California Earthquake Center. We apologize for the error.

PHOTOS: Faces in the aftermath of Monterey Park mass shooting

RuSC: The library is open for student drag performers