Thousands gathered for a second day of demonstrations at Los Angeles International Airport on Sunday, protesting against President Donald Trump's recent executive order, which bans the entry of travelers from seven Muslim-majority countries into the United States, in what many deem a racist and unconstitutional travel restriction.

The executive order suspends the immigration of anyone via the United States' refugee program for 120 days, including those whose applications were already approved. The ban on processing Syrian refugees specifically has an indefinite end-date.

For 90 days, the order also bars entry into the country for the over 200 million residents of seven countries: Iraq, Syria, Iran, Libya, Somalia, Sudan, and Yemen. This also affects people who are on long-term stays or who live in the United States but hail from those seven countries and do not have American citizenship. Initially, customs officers had blocked people with student visas, and green card-holding permanent residents, but Homeland Security Secretary John Kelly said on Sunday they would likely be able to re-enter the U.S. after undergoing additional screening.

As a result of the order and subsequent confusion, travelers were detained in airports across the world this weekend, awaiting release or deportation. Others were not able to follow through on planned travel, turned away from boarding planes to the U.S.

Demonstrators in the space between World Way and Tom Bradley International Terminal overflowed into the airport, calling for the release of between seven and 15 detainees. Many beat buckets as drums and chanted things like "from Palestine to Mexico, all the walls have got to go" and "love, not hate, makes America great."

Los Angeles and airport police watched over a relative calm throughout the day, packing on riot helmets after a small pro-Trump group began interacting with the heat of the protest across the street.

Near Pinkberry inside the terminal, attorneys and translators who had worked through the night to file papers on behalf of detainees welcomed the help of additional lawyers and Farsi-speakers.

"We believe there are a lot of detainees who are being held illegally and unconstitutionally," said Atoosa Vakili, an Orange County immigration lawyer. "We're here to assist them, however we can, and to pressure [U.S. Customs and Border Protection] to comply with the court order to release them."

That court order, a temporary stay granted by Brooklyn federal judge Ann M. Donnelly, who heard the American Civil Liberties Union's (ACLU) case against the immigration ban, demanded refugees and airport detainees across the U.S. not be sent back to their home countries. But the stay — and others like it in Massachusetts, Virginia and Washington — stops short of allowing the detainees into the country.

Still, not all cities have followed the ruling, leaving detainees and their families in an airport limbo, often unable to seek valid legal counsel. Soheila Hosseini and Pantea Sharifi, attorneys and Arabic-speakers, said the executive order and confusion around all of its parts was frustrating — but they see hope in the stay and in the city's reaction to the ban.

"Apparently arriving aliens don't have a right to counsel," Hosseini said. "They can only speak to their family members, but we're here to help in any way that we can, especially because we also speak Arabic and can help their families. There are other lawyers here who at least speak Farsi, and there are immigration lawyers here who only speak English, and we're all here to help. There's a whole group of people who are here to help and we'll do everything we can." 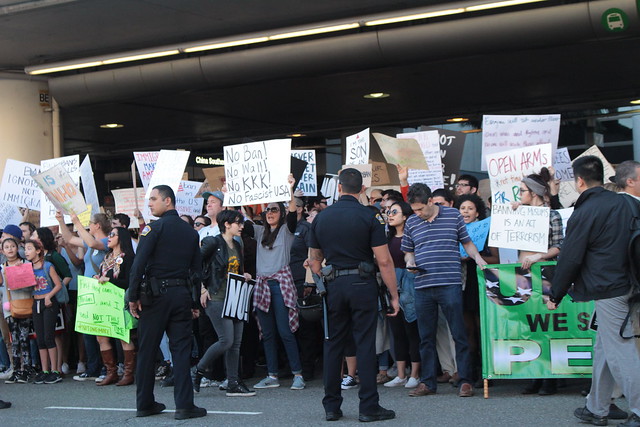 Protesters like Sarah Forth and her husband have seen the city and country band together before for what they thought to be righteous causes. Forth's husband refused the draft during the Vietnam War and spent two years in prison, and the couple has since actively participated in rallies including the Los Angeles women's march last week. Forth, a former professor of religion and women's studies at California Lutheran University, came to LAX to advocate against the ban with posters quoting the Book of Isaiah and welcoming immigrants.

"I was so outraged by this order," Forth said. "I'm especially concerned about Iran and Iranians. I've visited Iran twice as a citizen diplomat and they do not deserve the black marks they're given. It's not my heritage, but it's such a beautiful culture – to be banned like this … it's a country of intellectuals and engineers and doctors. This is nonsensical."

Trump adviser Kellyanne Conway said on Sunday the policy changes are "a small price to pay" for national security. But the order, which also calls for more rigorous screening for immigrants, reminded some protesters of past immigration bans in history — most notably, the Chinese Exclusion Act of 1882 and the pressures on Jewish refugees from Europe throughout World War II.

Brothers Noah and Adam Reich came to the demonstration together in reverence of their family history.

"Our grandparents were Holocaust survivors and our mom was born in a concentration camp," Noah Reich said. "When her family emigrated here to the U.S. and we were born, we got to be an extension of all they came from and all they survived. The rhetoric against Muslims that's taken place over the last couple of years and has become more and more aggressive reminded us of all our family had been through to make our lives here and to be here."

Adam Reich cited unity as his reason for attending the protest.

"I just hope the White House sees we're here, we're hopeful and we're not just going to sit down and relax while [Trump] pushes a racist agenda," he said.

The notion of unity echoed with the chants throughout the terminal, where actors Jack Falahee and Alfred Enoch were amazed by the diversity of protesters they were seeing.

"I think that's sort of representative of this country," Falahee said. "Much more so than something as atrocious as this executive order. Alfred said something, when one of the lawyers exclaimed how surprised and overjoyed they were to see more non-Muslims, non-Persians here supporting this action – Alfred said it's all of our responsibility."

Rennie is a news editor at Annenberg Media. She is majoring in Journalism and International Relations.