A poster in response to the art installation read "White Male Privilege Is A Myth." It was removed on Monday.

The new art installation outside of the ASC building, named "Dismantle Whiteness and Misogyny On This Campus," has triggered controversy, on and offline and has created conversations about the right to free and creative expression on campus and race.

A poster put up in response to the art installation said "White Male Privilege Is A Myth." At 9:08 on Monday morning an Annenberg professor saw the poster and took a photo. It was taken down shortly thereafter. She said that it wasn't there Friday when she left.

It is unclear who put the poster up or who took it down. We will update the story as more details emerge. 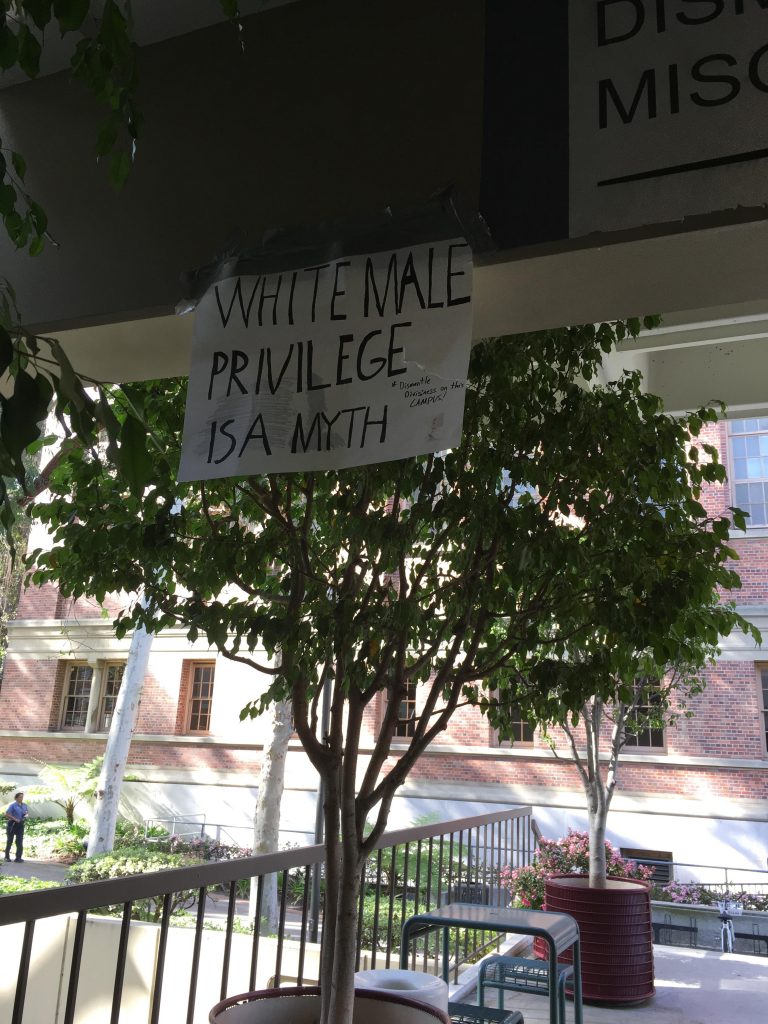 A poster put up near the Annenberg School for Communication and Journalism responds to a controversial mural.

The art was created by a three-member intersectional feminist collective called "When Women Disrupt," said Taj Frazier and Alison Trope, two Annenberg professors, in an email to Annenberg Media.

The USC Annenberg Office of the Dean said in an email statement last Thursday that the public installation, hosted by USC Visions and Voices, was in collaboration with students from COMM 366, "WOMAN: Designing Media for Social Change", and the Institute for Diversity and Empowerment at Annenberg (IDEA). The art installation was put outside the Annenberg School for Communication and Journalism on March 10.

If you’ve walked by the Annenberg School of Communication and Journalism this week, you may have noticed large art installations posted on the wall. The artists’ collaborative, #whenwomendisrupt, (@tlynnfax @jessicabogal @aboutherfilms) installed their work outside the building to start a conversation about the institutionalized and everyday systems of power and representation that reinforce racism, patriarchy, and inequity. The public art piece was installed last week at the east entrance of ASC as part of Annenberg’s “Off the Wall” series of multimedia art installations sponsored by @idea_annenberg (Institute for Diversity and Empowerment at Annenberg) with support from @VisionsandVoices. Do you want to see more art installations around USC? Take a look and let us know what you think. Photos by @natkeo #offthewall_annenbergc #womenactivisthistorymonth #womenartists #laart #wallart

"The artistic collaboration began with discussions between the artists and students about race, gender and class issues on campus. The resulting installation includes text derived from those conversations. The narrative signage accompanying the installation offers some context and grounding for the terms and ideas expressed in the mural," the statement said.

"We do not expect everyone to agree with the statement offered by the artists, but we hope that viewers can acknowledge the experience of peers on campus around these issues," Frazier and Trope said.

Charlie Kirk, the founder of Turning Point USA, a non-profit which promotes conservative ideas on college campuses, tweeted that the art installation is "amazingly racist," adding that university is "indoctrinating students being 'white' is bad." His tweet received more than 4000 retweets and nearly 8,000 likes in less than 14 hours.

This is a real mural put up at USC

This is amazingly racist. No one is good or bad based simply on skin color

The left is race obsessed. They are indoctrinating students being “white” is bad.

They are accusing us of what they actually are

"We understand that there may be those who disagree with the statement offered by the artists," the Annenberg Office of the Dean statement said. "However, we firmly believe that civil discourse and the free exchange of ideas around sensitive topics are critical to the resolution of differences and to address issues facing our community and society as a whole."

USC business major Max Brandon said he recognizes the problem of misogyny but feels that bringing up race is "stirring the pot."

"When I saw the sign, I could not believe Annenberg was open and willing to discussing something like this openly," said communications major Roberto Gutierrez. "I have yet to meet someone who is offended by it.

Some students said they feel the art display is not visible enough. 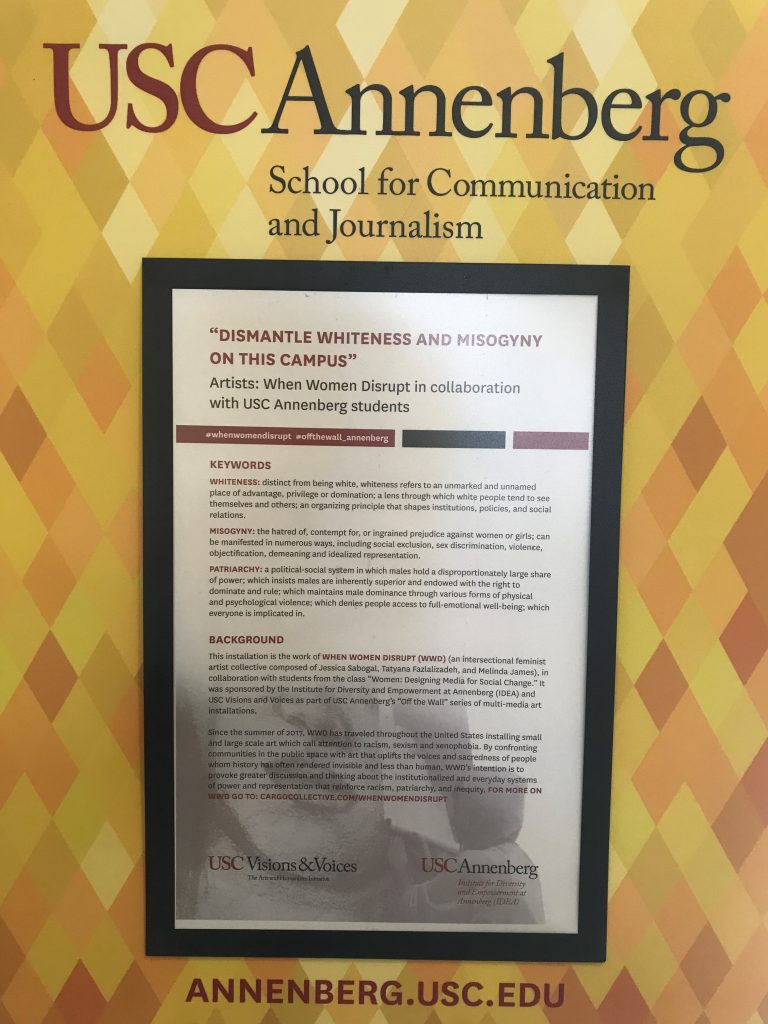 A poster near the mural explains the purpose of the installation.

"Most people don't know that this building is here, so I wish it could have gone in a more public space because if it was put up someone else, we wouldn't stop hearing about it," said journalism major Aiyonna White.

Others want the message of the art installation to go beyond USC's campus.

"I would hope that this installation would expand to other universities that would accept this message," said international relations major Tariq Ahmed.

We are reaching out to the USC Annenberg Office of the Dean and will update the story as more information becomes available.

This article was updated on April 16 at 3:30 p.m. with statements by professors from the class that collaborated on the art installation with feminist collective "When Women Disrupt" and the title of the class.

The silent pandemic: the children COVID left behind

Meet the rare Republican who might just benefit from defying Trump

Farm to Table: How locally grown produce gives us a look back at how we used to source our food