As many as half a million Central American immigrants come into the United States annually via the cargo train they've nicknamed "La Bestia (The Beast)," or the Death Train.

Fleeing from their countries and looking for better lives, migrants board the train however they can – hanging from the ladders, up on the roof and in between the cargo, putting themselves in danger of injury, rape or even death.

This week, the USC Fisher Museum of Art displayed an art exhibition called MONTARlaBestia, which seeks to put the migration crisis into perspective. With over 100 works of art in the form of various multimedia elements, the exhibition showcases migrants' struggles.

Mardonio Carballo, one of the art curators, said it took his team over a year to create the final product and said they were inspired by the struggle to create art that speaks against discrimination. Carballo, along with fellow curators Demián Flores, Gabriel Macotela and Marco Barrera Bassols, created the space because they think this is an important time to have art speak for society. 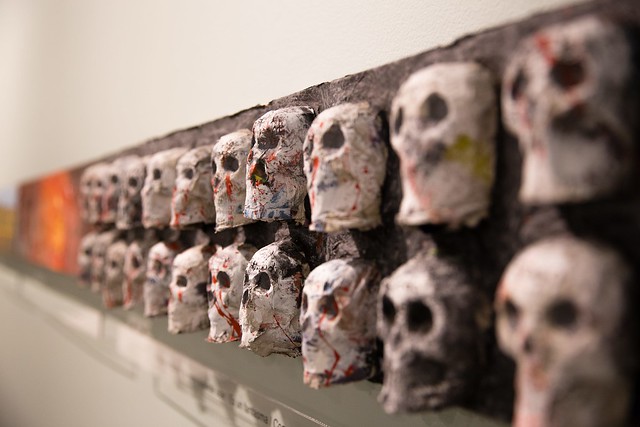 "Art is a fight for life," Carballo said. "We thought it was important for us to reflect on this and to break the idea of the artist as a creator only within his own space and not involved with his surroundings. To me, it's time to change things. I like being an artist committed to his time, his setting and to changing history."

The exhibition includes pictures in the shape of freight trains that when put together look like a train, poetry to add the element of language, headsets to listen to the poetry in both English and Spanish, statistics painted on the walls and a film to understand the situation firsthand.

Museum Director Selma Holo heard about the exhibit through Mexican friends in the art curation community, painters or poets that came to ask her if USC would be interested in hosting the exhibition. Given the current state of immigration in the United States, Holo said she thought it would be the perfect time to express these feelings through art.

"[It brings] the possibility to develop empathy," Holo said. "I think that when we see the desire, the anticipation, the willingness to take risks, the courage, the pain of the people who have tried to get to the U.S. to fulfill their dreams, we start thinking of them as human beings instead of looking down at them … we start to understand them."

MONTARlaBestia is also part of a collaborative project with Art Division, a non-profit organization that trains and supports underserved young adults in the visual arts. Art Division students have been using the Fisher Museum as a studio since the start of the year and will be now interacting with some of the artists from MONTARlaBestia.

Dan McCleary, founder and director of Art Division, said the majority of the participating students are of Central American decent. Their involvement with the artists from the exhibition will give them both exposure and connections to their Latin American roots.

"[It will give them] a sense of respect and accomplishment for doing work in a museum that is very established in Los Angeles," McCleary said. "And the opportunity for their work to be viewed by the larger LA population."

MONTARlaBestia opened to the general public on Mar. 19 with a reception at the USC Fisher Museum of Art. So far, the exhibition has followed La Bestia's path through Mexico, first stopping in Guajaca, then Puebla and finally into the long-awaited destination of the U.S. USC is the first stop on U.S. soil, but the group is unsure of where the display is headed next.

The exhibition will be on display at the USC Fisher Museum of Art through Apr. 8.

Portraits of A New Normal: Episode 3