The measure would help non-violent criminal offenders get parole

Democratic Senate candidate Loretta Sanchez campaigned Tuesday against Proposition 57, a measure to get non-violent criminal offenders more parole opportunities. Sanchez's opposition puts her in line with Republicans and at odds with her own party.

"The irony behind the sales version of this reckless proposition that was written by our supposed top cop, our attorney general, Kamala Harris," Sanchez said at the City Club in downtown Los Angeles. She's trailing Harris in the polls in California's U.S. Senate race. "This failed top cop wants Californians to approve a measure that will call serious violent crimes non-violent."

Prop. 57 is Democratic Gov. Jerry Brown's response to a U.S. Supreme Court order to reduce California's overcrowded prison population. If the proposition passes in November, those imprisoned for non-violent crimes will have more opportunities for early release from jail and prison.

Harris, a Democrat, supports sentence reduction and programs reintegrating former inmates back into society. She generally favors ending mass incarceration but cannot speak for or against any proposition because she is attorney general.

"As Senator, Kamala would lead efforts to roll back draconian sentencing laws for nonviolent drug offenses," according to her website.

The measure is officially supported by the Democratic Party of California and Californians for Public Safety and Rehabilitation.

Sanchez, however, says she opposes Prop. 57 because the definition for a non-violent offender is too broad and includes crimes she sees as being violent. She argues that crime is on the rise and Prop. 57 will soften state laws even though crime rates are at a 40-year low. California's Republican Party and law enforcement officials statewide also oppose the measure.

The opposition campaign positions itself as a champion for victims of crimes and focuses on the potential harm that could occur if an eligible prisoner receives early parole. This is best illustrated in the "Meet your New Neighbor Cards" section of their website that displays trading cards displaying the names, faces and crimes of offenders potentially eligible for parole opportunities. 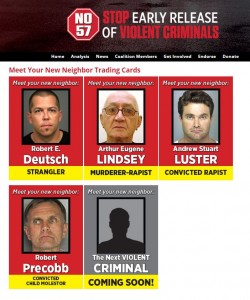 Yes on 57, an organization working to get the measure passed, says on its website that inmates are not "automatically released, or entitled to release from prison, under Prop 57."

Prop. 57's opponents have raised nearly $270,000 for their campaign while the support has raised more than $8 million.

In 2014, California voters approved Proposition 47, which reduced sentences for drug possession and theft crimes to misdemeanors. It reduced state prison and jail populations but has been criticized for not providing these offenders with the support they need to avoid future incarceration.

In conversation with the protesters at the Urumqi Fire Vigil

Thanks to Mike Garcia, Republicans win control of the House

USG votes to include JAMS among recognized student assemblies