By: Charlotte Scott
April 1, 2019
I have the distinct privilege of working with people of diverse genders, races, ages, and skill levels. The See It Live anchors are both women of color, we have a big team of producers and multimedia journalists (MJs), and we aim to include varied voices each show. I am thankful for the opportunity to work with an amazing group of individuals inside the Media Center. Every member of our team is a valued one, no matter their grade or skill level. And more importantly, every member of our team is treated with the same respect regardless of their position or background.
Tonight’s show was an in-depth look at opening day for the Los Angeles Dodgers. From the lead producer seat in the Media Center, I can only encourage MJs to interview diverse people when they’re out in the field. There’s no hand-holding, I can’t go with them, and I can’t decide who they interview. However, I’m impressed every week by the variety of people our MJs are able and willing to talk to. For example, almost every time I request man-on-the-street (MOS) interviews, the MJs do a wonderful job talking to men and women of all backgrounds, races, and majors. They understand how important it is to cast a wide net, to represent the immense diversity on our campus and in our Los Angeles community, and to branch out of their Annenberg bubble.

Today our reporter Tanvi Varma captured diverse voices in her story on a Dodger fan favorite: a well-known French dip restaurant in downtown Los Angeles called Philippe's that serves about 3,000 customers on opening day each year. Our MJ Miranda Virgen rode a Metro Dodger Express bus and interviewed Angelenos, including the bus driver, who thinks of the Dodger community as family.

It's my goal every week to showcase a range of voices in my newscast so that I represent the USC and Los Angeles communities accurately and fairly. 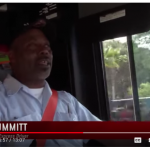